Login or register for tests, newsletters and community.


(The following article was written by Patsy (Smith) Stevens in 1974 and published in a paper concerning the education of children with learning disabilities.) About the Author

Soon after Linda* was enrolled in the first grade it became apparent that she was going to have learning difficulties. She was not ready to read, she reversed b's and d's consistently in writing and sounding the letters, she had difficulty discriminating between the v sound and the f sound, and confused z''s and v's when visually discriminating between them and when writing them. She also had difficulty following directions.

As she experienced failure after failure her self concept became lower. She had decided that she couldn't do anything....except draw, and she did have a talent for drawing.

She repeated first grade with little more success the second time. The following year, when Linda was a second grader, the school she attended became a pilot school for the Texas Plan A Comprehensive Special Education program. Plan A resource rooms were staffed on each campus of the district by Title 1 Reading Teachers, teachers for children with language learning disabilities, and instructional aides.

The services of an educational diagnostician, a counselor, and other instructional personnel were available to the children served within the resource room to work with the resource teacher one or more periods a day. They spent the remainder of the school day in the regular classroom with their peers.

Linda, in this one-to-one arrangement and with a program designed to fit her individual needs, began to make progress. A phonetic approach to reading was used. As she began to improve academically her self concept also began to improve.

(By the time Linda was in the fourth grade and after three years in the program, she was working math on a second grade level and learning to read the school lunch menu and recipes. She could also read books written on her level.)

One problem remained; Linda was incapable of reading the Weekly Reader * the other fourth graders were reading. We subscribed to Know Your World Extra* , the low vocabulary weekly, but even this material was too difficult for her.

Linda needed the information that could be gained from the school weeklies, and she needed to learn the new words they contained. We decided, therefore, to rewrite the Know Your World articles in language Linda would be capable of reading. 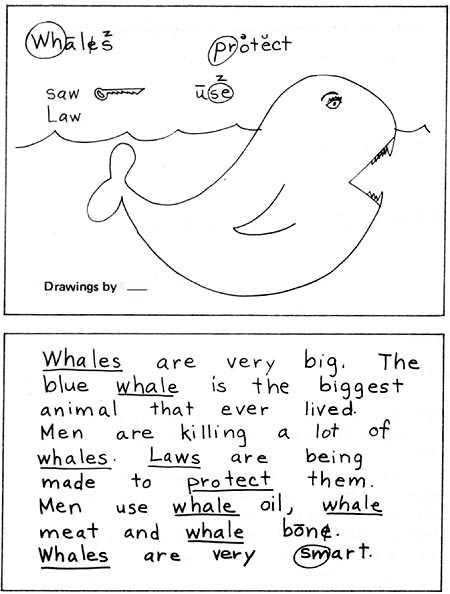 We began to make a scrapbook; a newspaper just for Linda. First I read the article to her just as it was written in the weekly. She then drew a picture illustrating the article. On the page opposite her drawing was the article rewritten by the teacher in large letters and in six or eight sentences. Linda was able to read this article. Unfamiliar words were printed on the page with her drawing. Each word was marked phonetically so she could decode it independently. The next step was to cut the photographs from the newspaper and paste them on the page or pages preceding the article.

Her news book is now becoming quite thick. In recent months, Linda has learned about coal mining, UFO's, John F. Kennedy, the comet Kohoutek, President Nixon, the choosing of a new Vice-President, and hydroponics, to name a few topics. She is very proud of the fact that she can read the word "hydroponics" and that she knows the meaning of it. She has a real feeling of accomplishment in her reading and in the talent for drawing that is helping her to learn to read.

A modification of this teaching idea has been used with small remedial reading groups. The articles are rewritten and typed in large primary type. Copies are then duplicated and each article is glued directly on the newspaper near the photographs. 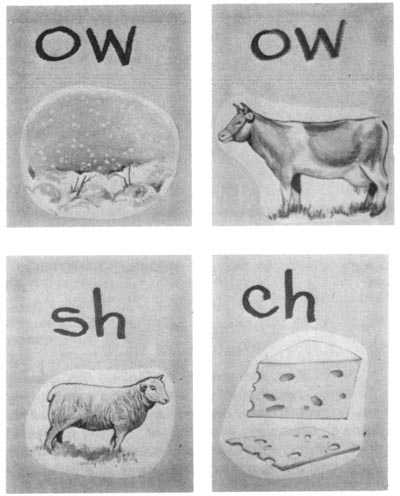 We find that cards with a picture stimulus are helpful in teaching the children letter sounds, short vowel, and variant vowel sounds and spellings. For instance, above a picture of a ring we printed "ing" and the child says "ing as in ring". Another card will have "ow" over the cow, and so forth. The child seems to be able to recall the picture and associate it with the letters as he/she encounters them in words.

In addition to remedial work in the area of reading we also plan activities for remediation of specific auditory and visual deficits as well as perceptual disabilities. Many children receive help with mathematics in the resource room.

Helping teachers, who are certified as teachers of children with language learning disabilities, have been added to the staff this year. They work in the classrooms with the regular teachers to provide additional help for those children who need it.

Thanks to the programs such as these, the future looks brighter, indeed, for children such as Linda.

* Student's name has been changed.