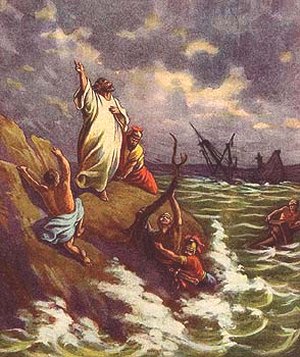 Paul sailed for Italy under the guard of a centurion named Julius. At the first stop Julius was kind enough to Paul to let him get off the ship and go visit his friends. They provided for his needs.

They sailed again and at the next port they changed ships. The wind was blowing so hard it was difficult for them to stay on course. Paul told them the trip was becoming dangerous, but the centurion decided to continue.

Hurricane force winds began to blow. They dropped anchor and the waves started battering the ship. In order to lighten the load, they began to throw the cargo overboard.

By the third day of the storm, they were throwing away the ship's sailing gear. The storm went on and on for days. Paul stood up and in effect said, "I told you this was going to happen". He encouraged them by telling them about an angel who had appeared to him in the night. The angel told him the lives of all the people on the ship would be saved.

They had endured the storm for two weeks and were now getting close to land. They measured the depth of the water again and again. It was obvious they were getting in shallow water closer to land. They dropped four anchors to prevent them from being dashed against the rocks at the shore.

Paul urged the men to eat to gain some strength. They hadn't eaten for fourteen days. He took some bread, gave thanks, and began to eat. The other men ate also. Then they threw the grain in the cargo overboard to further lighten the ship.

When dawn came, they saw land. They lifted the anchors and ran the ship to the shore. It stuck fast in a sandbar and the ship began to break into pieces.

The soldiers planned to kill the prisoners to keep them from escaping, but Julius, the centurion in charge of Paul, convinced them to spare everyone. He ordered them to jump overboard. Those who could swim swam to shore. Those who couldn't swim grabbed pieces of wood and floated in. Everyone was saved, just as Paul had predicted.

They were told the island was called Malta. The people there were kind to them. It was cold and raining. They started to gather wood for a fire. Paul picked up some wood and put it on the fire.

A viper crawled out of the wood and fastened itself to his hand. The people, when they saw the snake, thought justice was being done. They figured Paul was a murderer and even though he had escaped the sea, he was going to die of a snakebite. (Or so they thought.) They kept watching him to see what would happen. Then when nothing happened, they decided he must be a god.

They were invited to stay at the home of Publius (pub LEEus) the official on the island. The father of Publius was sick and Paul healed him. When the islanders heard of the miracle, they too brought their sick folk and all were healed. The people provided for all their needs and after three months they set sail again.

If you visit Malta today you can see the ancient city. 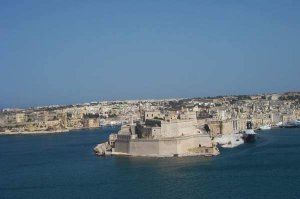 Fortifications on the island of Malta.
Enlarge 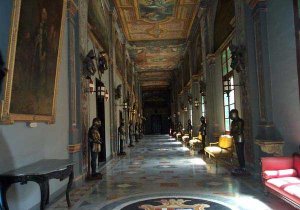 Inside the Grand Master's Palace in Valletta on the island of Malta.
Enlarge 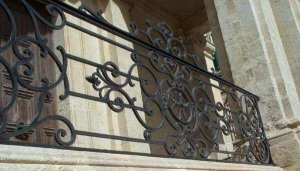 Iron work on the island of Malta. Notice the Maltese cross in the middle of the design. The eight points of the cross signify the eight beatitudes spoken by Jesus.
Enlarge


Read the story in Spanish Naufragio

What does this story
mean to me?
The centurion did not listen to Paul when he warned him about the dangers that lay ahead. If he had heeded Paul's advice their lives would not have been put in jeapordy.

Do your parents ever warn you about the dangers of a particular activity? Do you listen to them? Do they tell you that smoking is bad for you or that drugs can kill you? Be wise and heed their counsel. You can save yourself and your family a lot of heartache.

Spanish Bible Activities Select story #268-269 in the list for activities to accompany this Bible story.