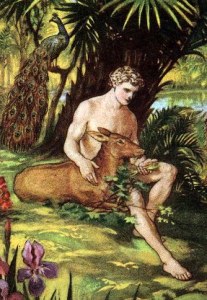 Long ago, before the earth and all things in it, there was only God.

On day one God said, "Let there be light." God called the light day, and the darkness He called night.

On day two God made the sky.

On day three God separated the land from the waters and created flowers, trees, and grass.

On day four God made the sun, moon, and stars.

On day five the birds and fish were created.

On day six God made animals and then He made people to be like Him. He named the man Adam, and Adam named his wife, Eve.

God rested on day seven. He saw everything He had made and said that it was good.

God made a garden home for the man and woman. It was called it the Garden of Eden. He told them they could eat fruit from all the trees in the garden except the tree of knowledge of good and evil. The serpent lied to Eve and she ate of the fruit. She gave some to Adam and he also ate of it. They had not been obedient and they had to leave their beautiful home. After that, they had to work hard and had many troubles.

It is always best to listen to God and do as He says.

In John Chapter 1 we read that the Word (Jesus) was with God in the beginning and that He was God. This is hard for us to understand, but we do know that Jesus was also the Creator. All things were made through Him, and without Him nothing was made that has been made.
The Spirit of God had a part in the Creation because the Bible says the Spirit of God was "hovering over the waters".

This story about the Creation can be found in the Bible in Genesis chapters 1-3.

What does this story
mean to me?
When we read about the creation of the world, we can see how wonderful God really is. When we look at a beautiful flower, it is as if God is saying to us, "Look at this amazing plant that I have made for you to enjoy." When we look at the clouds and the sky, we see God as the most wonderful artist, using just the right colors. And He made us, his people, able to appreciate all that He has created. How good He is!

God created our beautiful world for us to use and enjoy.

He showed His great love for us in the things and promises He made. He created man to live in His New World. How can we show our gratitude to our Heavenly Father?

God's most wonderful of the creation was man. He gave us the choice to choose between right and wrong. Think about what you would do if someone tells you it is okay to do something wrong because it is fun or you won't get caught. Can you have the courage to stand up for what is right? After all, look what God gave up for us.

Memory Verse
Through faith we understand that the worlds were framed by the word of God, so that things which are seen were not made of things which do appear. Hebrews 11:3

Creation Memory Pegs help you to remember the days of Creation.

English Bible Activities Select story #1 in the list for activities to accompany this Bible story.

Spanish Bible Activities Select story #1 in the list for activities to accompany this Bible story.

See a flash presentation of the Creation Kids 4 Truth


Books
Press "Go" to search for children's books about The Creation.
Credits and Solutions
Puzzles on these pages courtesy of
Songs of Praise and Armored Penguin