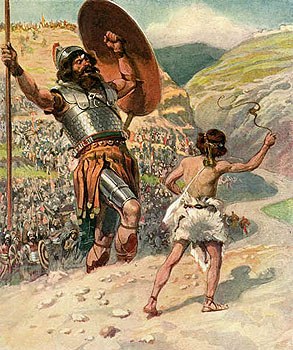 King Saul wanted to put his heavy armor and helmet on David. He also tried to give David a big sword, but David said he could not wear them. He knew that his strength and protection came from God.

Goliath cursed the boy coming out to fight him. David said to the Philistine, "You come against me with sword and spear and javelin; but I come against you in the name of the Lord Almighty, the God of the armies of Israel, whom you have defied."

David threw a stone with his sling at Goliath. It hit Goliath in the forehead and the giant fell face down. Without a sword in his hand he struck down the giant and killed him.

David believed in God, and God helped him win over the giant.

What does this story
mean to me?
David trusted God to help him even though the giant was much larger than he was. Do you have any "giants" in your life? Is there something so big that you don't see a way to overcome it? Ask God for help in meeting this enemy. Go to your parent, teacher, or a trusted adult for their wise counsel. Don't try to solve the problem by yourself.

This story about David and Goliath can be found in the Bible in First Samuel 17.

Memory Verse
David said to the Philistine, "You come against me with sword and spear and javelin, but I come against you in the name of the Lord Almighty, the God of the armies of Israel, whom you have defied. First Samuel 17:45
Take the online test

Song of David and Goliath

Spanish Bible Activities Select stories #78-79 in the list for activities to accompany this Bible story.


Books
Press "Go" to search for books about David and Goliath.
Credits and Solutions
Puzzles on these pages courtesy of
Songs of Praise and Armored Penguin